Opening Reproducible Research is a DFG-funded research project by Institute for Geoinformatics (ifgi) and University and Regional Library (ULB), University of Münster, Germany 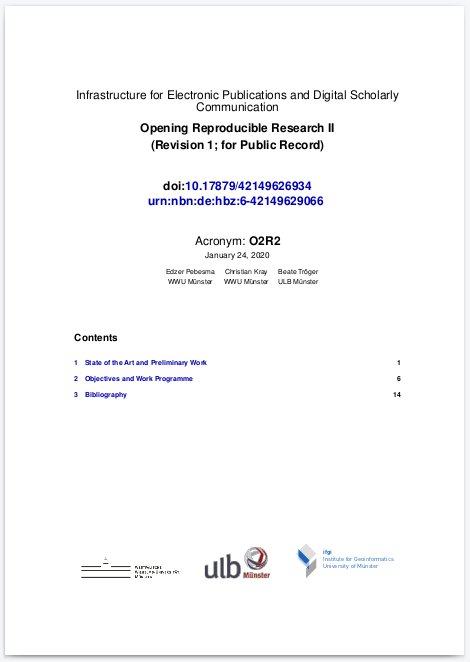 We hope this publication of our proposal serves several purposes: it encourages fellow researchers to also share their plans openly (both funded and rejected), it motivates us to achieve the ambitious goals, and (we have to admit) the proposal’s indexing in search engines hopefuly leads to some attention for the o2r project and subsequent new contacts and collaborations. Science reinvents the wheel much too often, and the o2r project team wants not only to increase openness, transparency and reusability of research workflows but also in the bigger picture of research funding and building of research infrastructures. Our perspective on the distinction between o2r and other projects described in the proposals is also the motivation behind our recent paper: “Publishing computational research - a review of infrastructures for reproducible and transparent scholarly communication”.

Figure: Overview of the work programme and objectives. The table shows key barriers, how these were initially tackled during ORR, and which implementations are planned to overcome them during O2R2 (green and blue boxes). Orange boxes show how we plan to evaluate implementations and deployment. The success measures indicate how we determine success. The blue box (bottom) summarises the technical outcomes of O2R2. 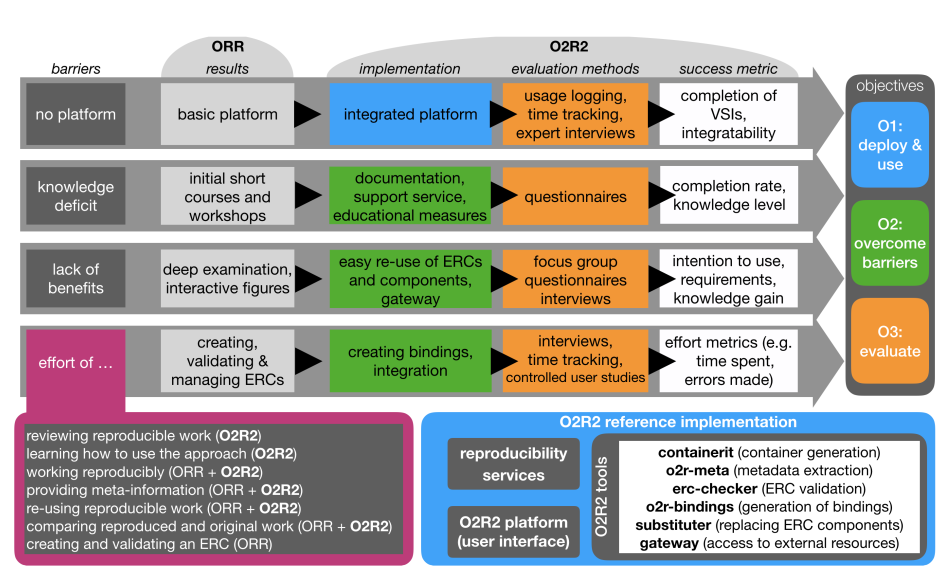 The document is a shortened version of the second revision submitted in May 2018, without funding information and project planning details but with a slightly updated title page to include DOI, URN, and a subtitle marking the public version. The submission underwent a single-blind peer review by experts from information science and geosciences after first submission in August 2017. The first version originally included a thematic extension into life sciences, with a number of new collaborators at the University of Münster, and the inclusion of Python as a second supported base software. A remaining point of critique was the description of our methodology from a research perspective. We were lucky that the information science reviewers and ultimately the deciding council agreed in the value of the experiences made from the perspective of infrastructure development, which can only be made with a concrete practial evaluation. The increased focus allowed us to reduce the project duration and continue with the existing approach, but also puts the remaining pilots under time pressure. More on the pilots soon!

If you want to discuss the article above, find us on Twitter: @o2r_project

Except where otherwise noted site content created by the o2r project is licensed under a Creative Commons Attribution 4.0 International License.